A Conversation with the Artists: Young Sun Han and Nikki Schiro

Korea Art Forum presents A Conversation with the Artists:

August 10, 2019, New York, NY — Korea Art Forum (KAF) is pleased to present the fourth part of KAF 2019 FORUMS series, A Conversation with the Artists. Seeking to engage with wider audiences, this evening discussion invites Young Sun Han and Nikki Schiro, whose work is shown in the current KAF’s exhibition. The artists will share their creative processes, exploring the issues of state violence, internal or external conflicts, art and life, and peace building. 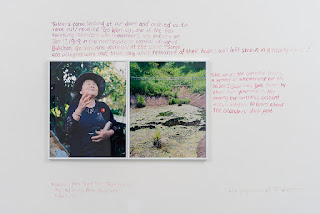 Young Sun Han is a visual artist, lecturer, and curator who articulates human stories through photography, moving image, durational performance, rituals, installation, and found objects. His work aims to reveal how individuals and communities negotiate and adapt to cultural forces in order to locate their sense of place within society and history. Han recently completed his MFA from the Mason Gross School of the Arts, Rutgers University where he was awarded the Brovero Photography Prize. He is currently on residency at the inaugural Materia Abierta art and theory program in Mexico City, and his solo exhibition, "Limbo Exchange" is on view at Elijah Wheat Showroom in Brooklyn, NY through September 1st. Han's work has been exhibited in many group shows including: David Zwirner and Printed Matter in New York, Jean Albano Gallery and Zolla/Lieberman in Chicago, Independent Brussels, the Anti-Art Fair London, 4A Centre of Contemporary Art in Sydney, Australia, the University of Sydney, the Suter Contemporary Art Biennial in Nelson, New Zealand, The Dowse Art Museum in Lower Hutt, New Zealand, Sanderson Contemporary Art in Auckland, New Zealand. 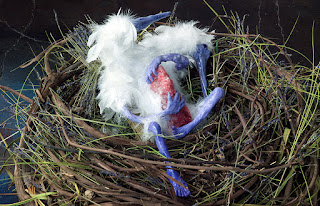 Nikki Schiro is a native New York artist.  Her recent work reintroduces ancient and mystical principles that can and do serve humanity today. Schiro has exhibited her artwork extensively, in galleries, museums, non-profit and alternative spaces, at home and across the globe. Schiro currently has work on view in Istanbul, at PG Gallery, and most notably, Schiro has been engaging with China since 2010. Nikki Schiro exhibited in the Third Nanjing International Arts Festival (2016); the Inaugural Biennale of Emei MOCA in LeShan, Sichuan Province (2016);  Nova Art Coordinates Gallery in BeiGao, BeiJing (2011) and The Women and Children’s Museum in Chengdu (2010). She is the first foreign artist to have a Solo Exhibition in Chengdu, which took place at the Blue Roof Gallery (2010). She participated in the Red Gate Residency in Beijing (2011) and Highland Residency in Chengdu (2010). www.nikkischiro.com.

For more information please visit www.kafny.org or contact at info@kafny.org.
KAF FORUMS are generously supported, in part, by public funds from the New York City Department of Cultural Affairs in Partnership with the City Council and are co-hosted with OZANEAUX ArtSpace. The curatorial research of KAF’s 2019 exhibitions is made possible by the generous support from the Asian Cultural Council, New York.

OZANEAUX ArtSpace is a philanthropic, artist-run exhibition/project space created by Nikki Schiro and Frederic Ozaneaux in 2009. It hosts Contemporary Art exhibitions for Artists and Curators in the couple's community. The exhibitions highlight Artists from underrepresented demographics as well as foreign exchange. The gallery is planted in the back end of an accounting office, in the heart of New York City’s Gallery District. www.ozaneauxartspace.blogspot.com 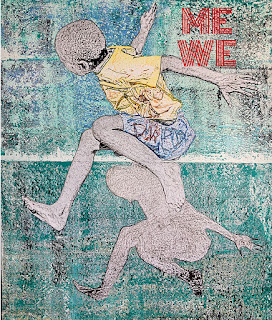 FOR IMMEDIATE RELEASE:  August 15, 2019, New York, NY — OZANEAUX ArtSpace is pleased to present ME WE, an exhibition featuring artworks by two emerging African immigrant artists, Alou Dia and Ludovic Nkoth, living and working in New York City. This exhibition seeks to bring together all people-- from the art world and beyond--to collectively explore what it means to be an African and an immigrant in this country, and what it truly means for America to be great. The opening reception will be held on Thursday, September 5 from 6 to 9 pm. Please join us in celebrating the opening of this meaningful exhibition.

Using techniques including collage, drawing, and squeegee painting, Alou Dia tells his personal, tense and hopeful experience of immigrating from Senegal to the United States. In his paintings, warm color palettes with thick and rich textures, geometric or floral patterns stemming from African fabric, and pictorial images of urban environments are seamlessly woven into a beautiful story.  These stories depict happy, flashing memories of Dia’s hometown, where he spent his childhood, revelation of his African identity, and a new life here, in New York City. Dia’s canvas offers a moment of reflection on relevant issues, including the meaning of nation and border, interwoven and interrelated cultures, as well as self-care and respect for others.

Ludovic Nkoth explores the relationship between the body and urban spaces while investigating the impact of colonization on pre- and post-colonial Africa and the African diaspora. In wrestling with figuring out his identity as a person of color, he communicates tension by crafting and infusing rich textures and colors from both opaque and transparent layers. The artist states that ever since he was a pre-adolescent, he has been fascinated by the essential “unreality of the moment.” What starts out as vision soon manifests itself as a corruption of greed, producing only a sense of chaos in which a new process of understanding has to be undertaken. As momentary simulacra of reality become revealed through frantic and critical practice, the viewer obtains a new access to unique authenticity and lasting truth.

Alou Dia was born in Senegal, where he grew up with his older brothers. His childhood was the beginning of his fruitful engagement with the arts. In a place devoid of water and electricity, he and his friends relied on their imaginations. This scarce and unforgiving environment opened up his mind, and led to creation via deprivation. Once of age, he moved to Corsica, France to join his parents. He went on to study Art at École d’Art Appliqué of Lyon, École des Beaux-arts of Marseille, and University of Montréal. He took his education, experience and passion to New York City in 2011 to pursue a career as an Artist.

Ludovic Nkoth began his journey from Cameroon, Central Africa. The vibrant cities inspired him at an early age so much that he spent most of his time with filling sketchbooks and learning to express himself creatively. Through his vibrant use of color and ability to capture life through a distinct lens, Ludovic’s past time was consumed with rough sketches of the beautiful cities of Cameroon. At the age of 13, Ludovic moved to the US, bringing with him an artistically brilliant mind and a passion for art. Exploring his artistic abilities, Ludovic established a distinct style of brush strokes and use of color. His style consists of depicting energy and emotion through color choices; creating expressive art with a direct reference to Africa and the African diaspora. Ludovic’s pieces are bold and daring. Ludovic is currently based in New York City where he continues to develop his craft and his voice as an artist.

OZANEAUX ArtSpace is a philanthropic, artist-run exhibition/project space created by Nikki Schiro and Frederic Ozaneaux in 2009. It hosts Contemporary Art exhibitions for Artists and Curators in the couple's community. The exhibitions highlight Artists from underrepresented demographics as well as foreign exchange. The gallery is planted in the back end of an accounting office, in the heart of New York City’s Gallery District. www.ozaneauxartspace.blogspot.com

This exhibition is curated by Heng-Gil Han, Director of Korea Art Forum (KAF), a non-profit organization founded in New York City in 2013 by artists, scholars and peacemakers committed to bridging the world through art. KAF strives to find an aesthetic domain that is conducive to create a peaceful world of coexistence and co-prosperity. KAF embraces experimental and under-recognized artistic practices, attending to the values of inclusion, fair representation and discussion in the field of contemporary art. http://kafny.org